Dear members of the Board

First and foremost, we hope you and your loved ones are keeping well and staying safe during these worrying times.

Under the regulatory license of Mirabella Financial Services, the investment personnel seconded from Staude Capital Limited act as the portfolio management team for the Global Value Fund, an investment company that holds an investment in VPC Specialty Lending Investments (“VSL”, the “Company”). Global Value Fund has been a shareholder in VSL since May 2017.

As you are of course aware, VSL is required to put forward an ordinary resolution at the 2020 AGM, providing shareholders with an opportunity to vote on the continuation of the Company in its current form. These periodic votes, rather than a formality, are an opportunity for boards and shareholders alike to reflect on whether the opportunity set is still attractive, the current structure is still suitable, and whether there is sufficient demand in the market to ensure the returns that shareholders receive are broadly consistent with the underlying NAV performance, and not instead dominated by the share price to NAV discount. We are keen, therefore, to share our own views ahead of any proposals being set in stone. Whilst we do not claim to speak on behalf of any shareholders but ourselves, we do not believe our views are unique to us.

After a poor first few years, where NAV returns and dividends failed to meet the targets set out at IPO, VSL’s NAV has performed well over the past couple of years¹. Victory Park Capital (“VPC”) deserves a great deal of credit for this turnaround, especially given that stronger performance also coincided with a transition away from marketplace loans into ostensibly safer balance sheet investments. To be clear, our views set out in this letter in no way reflect dissatisfaction with VPC, with whom we have always enjoyed a constructive dialogue.

Despite the turnaround, VSL shares have continued to trade at a persistently wide discount. In fact, progress at the NAV level has seemingly made no difference (see Chart 1). 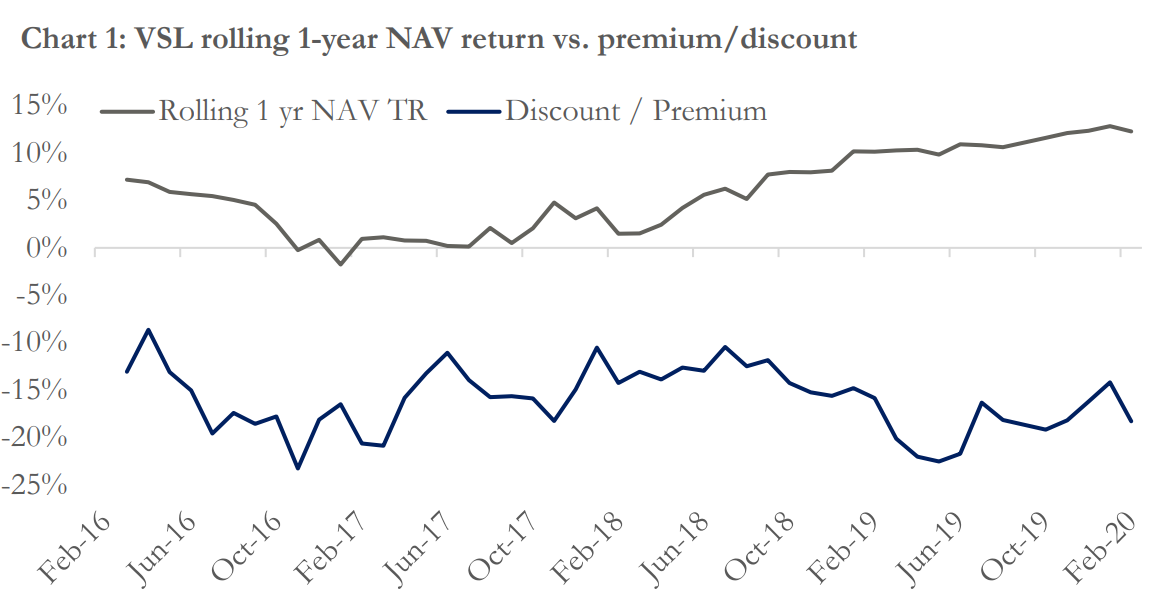 The persistent discount, in our view, reflects an unfortunate reality: VSL and similar funds owe their existence to the support of a very small number of investors — principally Woodford and Invesco — that are either no longer in existence or have been exiting the asset class. VSL and its peers have never widely gained traction with the broader closed-end fund investor-base, particularly private wealth. Consequently, even before the recent Covid-19 events, it is our view that the share price discount VSL suffers from has become structural. This is not a temporary phenomenon that more time will fix. As welcome as the manager’s turnaround in NAV performance has been, these efforts have been, and will continue to be, entirely overshadowed by a structural problem with the listed fund. There is clearly some demand for this asset class – as demonstrated by the substantial assets VPC manages in its private funds – but it does not necessarily follow that there is enough demand for it in a viable listed closed-ended format.

Moreover, recent events have clearly made this predicament far worse for existing VSL shareholders. VSL shares are now trading on a discount of more than 50% to NAV (Chart 2). While almost all investment companies were hit by the recent market sell-off, VSL is one of the few whose share price has barely recovered at all. We note that out of 38 debt-focused investment companies listed on the AIC website, only two are currently trading at wider discounts than VSL². With a seemingly endless supply of sellers in the market and thin liquidity, even when the buyback is in operation, there seems little chance of any meaningful re-rating within an acceptable time horizon. 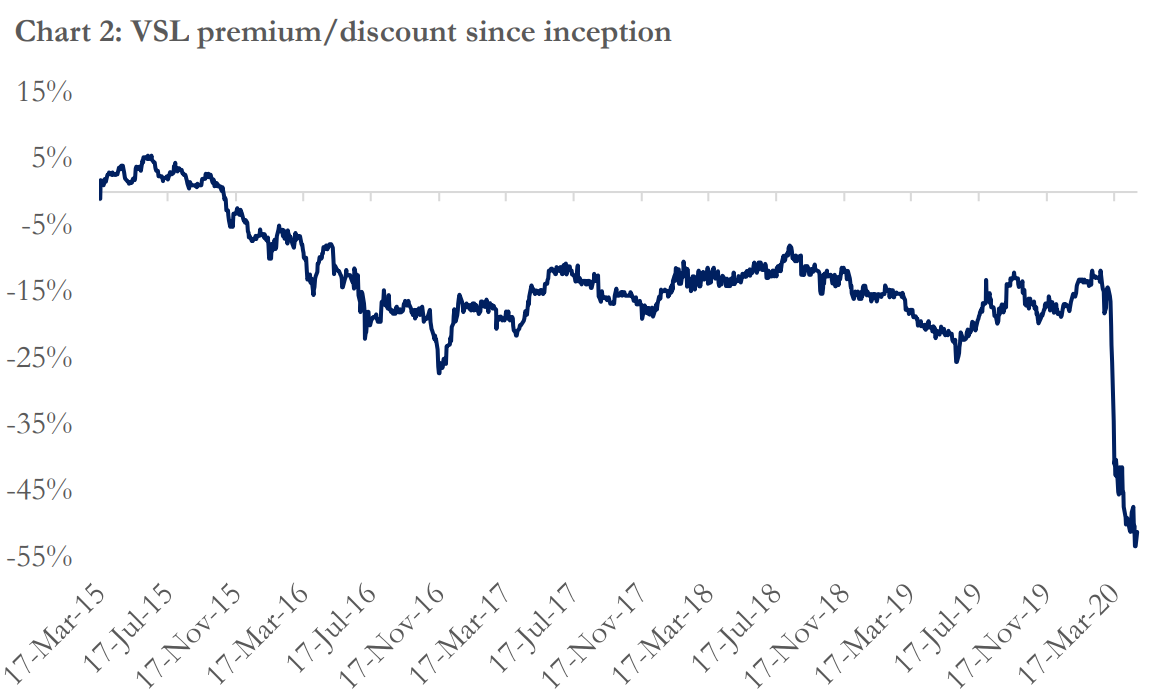 With this situation in mind, rather than presenting a binary continuation vote to shareholders, we would ask the Board to allow shareholders to elect for one of two options in relation to their own holding:

As per VSL’s March 2020 Covid-19 update presentation, VPC is already working with its portfolio of companies to “significantly reduce new originations”. This would suggest that, in effect, a substantive run-off is already underway, albeit with cash being accumulated at the Company level. In our proposal, shareholders would simply be electing between whether this arrangement is made permanent, with their share of proceeds returned to them over time, or whether their share of the cash is reinvested in due course.

It is possible that if shareholders are given an exit opportunity, VSL would become so small as to be unsustainable. This scenario should not justify the status quo. Firstly, as a principle, shareholders wishing to realise their investments at NAV should not be held captive to reduce the burden of operating expenses on those that wish to remain invested. Secondly, if there is overwhelming demand for an exit, this is clearly proof that the Company no longer has the support of most of its owners in its current form and a full wind-up is the right course of action.

Arguments against providing a run-off and our counterarguments

We expect two main arguments against allowing shareholders an exit:

Regarding the first argument, shareholders are clearly able to decide what is, or is not, in their best interests with regards to their invested capital. Moreover, it is not clear to us why this situation would be different at any future date. We note that between April and December 2019, despite the looming continuation vote and a wide discount, average maturities on the Company’s balance sheet investments were pushed out from 27 months to 34 months. In any case, we understand from conversations with VPC that there are several scenarios in which these facilities could return cash to VSL early. Given the current economic climate, the most relevant of these is that the underlying loans within VSL’s various lending facilities are subject to a range of performance tests. If these tests are breached, the facility is terminated, and the underlying loan book will run-off. It would seem reasonable to conclude that at least some of VSL’s lending facilities will breach their performance tests over the coming months. In these cases, shareholders should be able to have their capital returned much more quickly than simply waiting for these facilities to naturally expire.

The second argument – that now is not the time to be selling assets – is also overstated in our view. Fundamentally, VSL’s portfolio is largely ‘self-liquidating’ and nothing need be sold into what we recognise is a stressed market. All the Company’s balance sheet facilities and underlying marketplace loans have specified maturities, and a decision by VSL to put part of its investment portfolio into run-off should have no bearing on what ultimate loan returns will be. Performing loans will be repaid, while non-performing loans will have to move to workout. Redeeming investors would simply be choosing not to reinvest their capital as it is received back over time. That said, it does not prevent this being expedited through sales, by choice, if this is in redeeming investors’ interests. To the extent that not all the portfolio is self-liquidating, for example equity stakes, these investments are a minor part of the NAV and could be sold in an orderly manner over time with the proceeds shared accordingly.

Finally, the recent acquisition of an 18% stake by SVS Opportunity Fund, L.P. will be of great concern to many shareholders. As general partner of this fund, VPC is, of course, entitled to vote according to what it perceives to be in the best interests of itself and its limited partner clients. However, for VSL, it means that the vote of the Company’s largest shareholder is currently controlled by someone that, uniquely, has other economic incentives. We ask the Board to be conscious of this conflict when considering its course of action.

We would appreciate the opportunity to discuss this letter with the independent members of the Board at a time and date of your convenience.

¹ At the time of writing, NAV performance is known up to and including Feb 2020.