Debt in a time of crisis

The ability of countries to support their economies today turns on fiscal practices that were set well before this crisis.

Even before the arrival of Covid-19, there were few topics as polarising in politics and economics as the size and rectitude of government debt levels around the world. In the face of the ‘once in a lifetime’ emergency that the global financial crisis (GFC) presented, governments everywhere ran towering fiscal deficits – fighting to stave off economic depression and keep the financial system operating. With few exceptions, the debts incurred then are still with us today. Now, little more than a decade on, instead of being the once-in-our-lifetimes event it was touted as, the GFC is looking like a mere entrée to the main Covid-19 borrowing event.

According to the IMF, gross government debt levels will rise by a staggering US$6 trillion in 2020, a larger increase than was seen in any of the years of the GFC. Moreover, it is a rare optimist that thinks 2020 will see the end of this pandemic, or the economic damage it has caused. In fighting this virus, governments everywhere are set to live substantially beyond their means for years to come. 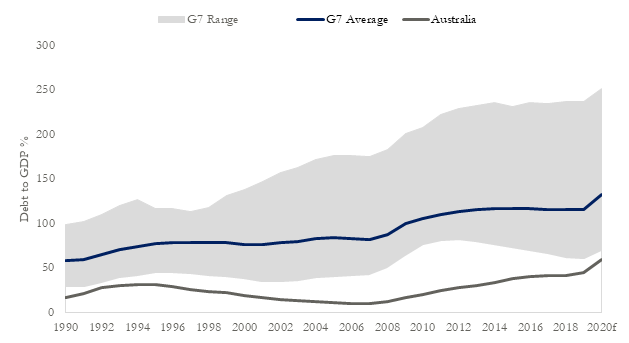 The debt burdens that the GFC left rich world societies with were highly divisive. In academia, a significant split emerged within the field of economics, one that has yet to be bridged. Are higher levels of national debt dangerous, or do they represent prudent policy at a time of unfathomably low interest rates? In 2010 two high profile Harvard economists, Carmen Reinhard and Kenneth Rogoff, published a seminal paper titled “Growth in a Time of Debt”. Its key premise was that increasing levels of government debt lowered a country’s rate of economic growth. Importantly, their work identified a number of key tipping points, debt thresholds at which growth rates seem to dramatically fall. The most alarming of these was the notion that when a country’s public debt to GDP ratio exceeds 90%, the economic growth rate of that country should be expected to halve.

With the GFC pushing many countries’ debt levels precariously close to this key threshold level, their analysis became a rallying cry for those that believed in fiscal prudence. More widely, the notion that greatly increased levels of government debt were dangerous became a key pillar to the philosophical underpinnings of the austerity programs that followed the GFC, particularly in Europe.
Embarrassingly, several years after the Reinhard and Rogoff paper was published, critics uncovered a series of calculation errors within the underlying data that they used. Later papers by the authors (which do not contain errors), as well as independent work by the International Monetary Fund, reached similar conclusions to the initial paper – namely, that rising levels of debt do reduce economic growth rates. However, by this point, the schism within the field of economics was firmly entrenched. Moreover, these later works show that the relationship between rising levels of debt and falling rates of growth is less severe than first thought. There also appears to be little evidence to support the idea of a clear tipping point once debt to GDP breaches the 90% level.

Sailing into the unknown

Today, sadly, few topics in politics attract more scaremongering than government borrowing. In truth, we have a limited understanding of the consequences of large national debts – academically robust arguments exist both for and against. It seems clear that some link exists between higher debt and slowing economic growth – an equation that, at some point, must spell disaster. The most favoured (and least painful) solution to all debt problems is to grow your way out of them. So long as an economy’s nominal growth rate remains higher than its government’s cost of debt, a country’s debt-to-GDP ratio will shrink over time. When viewed in this way, increasing levels of government debt can be thought of like a factory that takes out a loan to expand. So long as the expansion increases earnings, and those earnings are greater than the cost of interest on the loan, over time the higher earnings pay back the debt.
That logic – that increasing levels of national debt are effectively an investment – forms the core of the counter-argument for those relaxed with the levels of government indebtedness today or are in favour of further increases. What matters less than the size of debt is its cost, and whether it will be put to productive use. The first of these arguments is where the proponents of this view are on their firmest ground. Across the rich world, government borrowing costs have fallen to almost zero. In some countries they are even negative. Faced with the prospect of investing with ‘free’ money, who wouldn’t want to invest to expand the factory? When considering genuine long-term investment into an economy’s future capacity, this logic is hard to fault. When the Australian government can lock in ten-year debt today at an annual interest cost of less than 1%, how could there not be a better time to be building the hospitals, airports and roadways of the future using somebody else’s money.

Have cheque book, will spend

Taken to its furthest, the debt is ‘costless’ argument forms the foundation of some of the more extreme economic ideas that have arisen since the GFC, such as Modern Monetary Theory (MMT). Explained in its most basic form, the key insight of MMT is that government borrowing is manifestly different from the borrowings of households or businesses. Why? Because governments can issue their own money, so their supply of currency is in effect endless. Further, when a household or company issues debt, it creates both a liability (the loan) and an asset (a promise to repay the loan). In aggregate then, the issuance of debt creates no change to the overall wealth of the private sector, the loan and the asset it creates offset each other. If a government issues debt however, it can increase the overall wealth of the private sector, because both the government debt that’s been issued, and the cash that was used to buy it, are assets when held by private investors.
If you need to stimulate the economy, or want to embark on some Gosplan-like spending initiative (in the US, some proponents of MMT see it as a way to pay for things like a ‘Green New Deal’), all you need to do is increase the deficit. If interest rates go up in the future, and debt is no longer so cheap, you just borrow to meet those costs too.

In their defence, the more reasoned MMT campaigners do not claim that large government deficits have no consequences at all. Rather, their central claim is that there is significantly more capacity to use government debt than we have historically believed. In support of this argument, the example of Japan is typically used, a country that has successfully managed debt to GDP ratios of >200% for many years.

Ideology is like your breath: you never smell your own

Perhaps undermining the Japanese example, is that Japanese growth rates have collapsed in tandem with its ever-increasing debt load. A fact that brings us back to the crux of the problem that Covid-19 presents today. There is no way out of the economic crisis that the pandemic has brought without governments running stunning fiscal deficits. The only debate today is how big these should be, and how long they should last. Yet, deciding how to spend the money will prove to be far easier than the intractable debate of tomorrow – what do we do with the colossal debts the pandemic leaves behind.

The truth is we still have an incomplete understanding of the long-term consequences of large national debts. Within the academic uncertainty, there exists enough intellectual cover for those on both the left and the right to advocate their standing ideological positions, with sufficient ammunition available to press their case. What is unfortunate about this is that it smothers sensible debate. In politics, the media and around the dinner-party table, most people’s views on the virtues of government debt were firmly established before the pandemic struck. In many countries, that is going to make a reasoned debate about the challenges to come almost impossible.

However much their critics seek to ridicule Reinhard and Rogoff’s initial mistakes, there exists a significant body of economic research that suggests rising levels of debt reduce economic growth rates over time. Equally though, how much debt could be carried before the problem becomes severe is poorly understood. Given the knowledge gap we are left with, perhaps a different approach to the problem is to acknowledge that, regardless of its impact on growth, increasing levels of debt indisputably escalate overall risk, and tie our hands in the future.

Today, the countries that have treated national indebtedness as a scarce resource outside of times of crisis, are the ones that find themselves with the greatest capacity to protect their economies now. For years, fiscally prudent Germany was criticised by its European neighbours, the IMF and those ideologically inclined to spend and borrow more. Instead, its finance ministers, backed by voters, pursed their schwarze Null (black zero) policy – a commitment to run government surpluses. Philosophically, it was based on a view that a balanced budget and low government debt were far-sighted goals that stored up ammunition for real crises. Vindicated today, and uniquely in Europe, Germany has had the ammunition to launch a substantial stimulus plan. It also has the scope to add to this greatly if needed. Luckily, Australia is one of the few rich-world countries which also finds itself in this camp. To date the country has launched the second largest economic stimulus package in the world. Like Germany, it also retains plenty of scope to add to this if needed.
We all hope that the expected ‘second wave’ proves to be manageable and that ultimately a Covid-19 vaccine is found. Hope, however, won’t keep the lights on if this doesn’t prove to be the case.