House prices have been one of the unexpected beneficiaries of the pandemic. Lockdowns and the working-from-home revolution have spurred demand for more space, a larger garden, or a more suburban location. This greater appreciation for a better home environment has also manifested itself in a surge in demand for home improvement goods and services, as demonstrated by the earnings of DIY chains. This spending on new homes and home improvement has been further helped by the significant savings that households have accumulated over the past year and a half, not to mention, of course, negative or negligible interest rates and unprecedented fiscal and monetary stimulus.

Sometimes it is easy to see house price moves through the lens of one’s local market. Writing this in the UK, for instance, much of the commentary around house prices has focused on a ‘stamp duty holiday’ and the effect this had, not just on the affected properties, but all the way up the buying chain. While correct in asserting that tax relief has been helpful for prices, this risks missing the wood for the trees. What we are in the midst of is a global housing boom.

According to Knight Frank, in the 12 months to Q1 2021, globally, house prices rose at their fastest rate since Q4 2006. And while there are some countries where this was not the case – for example India (-1.6% year-on-year) and Spain (-1.8%) – these are the exceptions, not the norm. As the table below illustrates, prices grew by an incredible 32% in Turkey in 12 months. New Zealand is also in the midst of a housing boom, with prices up 22% over the same period. Other notable moves are +13% for the US, and +10% for the UK. Australia’s year-on-year growth of ‘only’ +8.3% appears pedestrian by comparison. 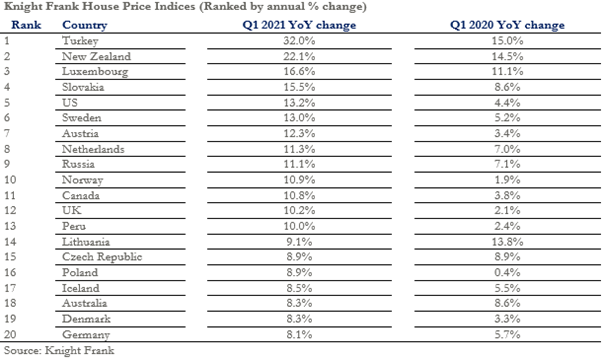 An understandable assumption would be that the Q1 2021 price moves reflect ‘base effects’ owing to the pandemic. The table above therefore also gives the year-on-year changes for the prior 12-month period ending Q1 2020, and shows this not to be the case. In the 12-months to Q1 2020, Knight Frank shows prices up +15% in Turkey, +14.5% in New Zealand, +4.4% in US, +21% in the UK, and +8.6% for Australia. Far from prices rising off a low base, what we are seeing is an acceleration of an already strong upwards trend.

Price changes can only tell half of the story though. A better reflection of how sustainable price increases are is given by ‘affordability’ measures – for example, price-to-income or price-to-rent ratios. Logically, since houses are generally purchased with mortgages that must be repaid over a period of 25-30 years, prices should only be able to deviate from salaries so far, before they become unsustainable for buyers to fund. 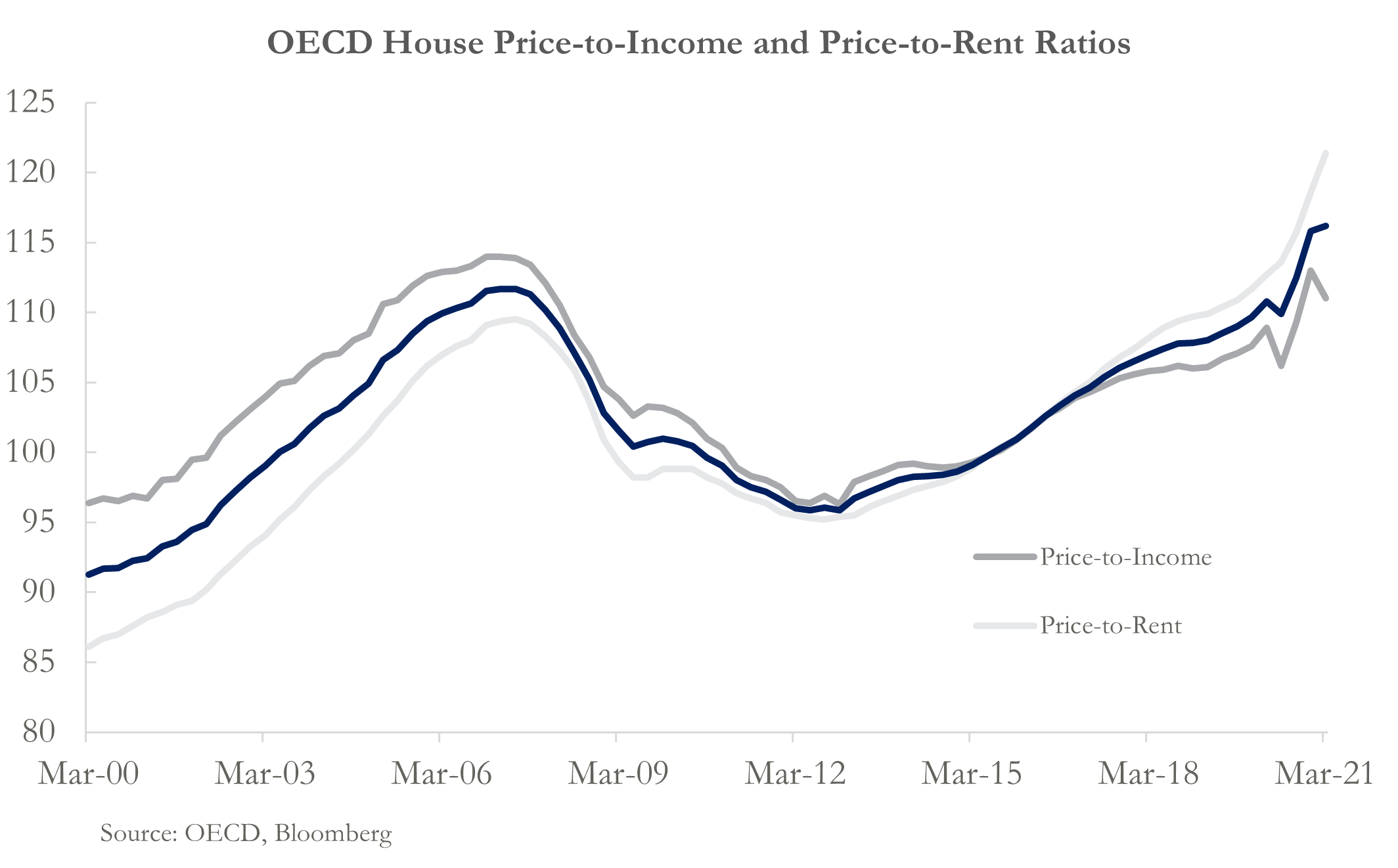 On the way up, amplified by borrowing, house prices can be a tremendous creator of wealth – or at least a ‘wealth effect’ – which in turn can be a major driver of consumption spending. Fear of missing out, or FOMO, can be particularly strong when it’s not just an asset, but a home, and when first time buyers otherwise risk being left behind. This can lead to desperate buyers borrowing far more than they could afford in anything resembling a return to a normal interest rate environment.

On the way down, prices can have the opposite impact on consumption and the economy, with the sting in the tail being that banks’ balance sheets can be impaired, weighing on any recovery. Studies show that housing booms and busts can pose significant risks to financial stability, and recessions are noticeably more severe when preceded by them. Unsurprisingly then, governments and central banks are taking note.

Earlier this year, the government of New Zealand – a country Bloomberg Economics ranks number one on its housing ‘Bubble List’ – amended the remit of the Reserve Bank of New Zealand such that it must now “assess the impact of its monetary policy decisions on the Government’s policy to support more sustainable house prices”. The Reserve Bank has since announced plans to tighten mortgage lending.

The Bank of Canada (BoC) has also been particularly concerned. In its 2021 Financial System Review published in July, the BOC highlighted that “while fundamental factors had sparked the rapid rise in house prices, a concern for financial stability is that the increase may also have been driven partly by expectations of future price increases”. The report warns that prices could become disconnected from underlying fundamentals, and an eventual correction could have important implications for the stability of the financial system and economy more broadly.

Most significantly for global investors, minutes from a June 2021 meeting of the US Federal Reserve noted that several participants had highlighted that “low interest rates were contributing to elevated house prices and that valuation pressures in housing markets might pose financial stability risks.” The concerns were repeated in its July 2021 meeting too. According to the FT, the presidents of the Boston Fed, the Dallas Fed and the St Louis Fed have all expressed concerns over what Fed policies are doing to the housing market, with the Dallas Fed president advocating ending the Fed’s $40bn of monthly mortgage debt purchases sooner rather than later. For now, it appears that the risk of stoking a house price bubble is seen as the lesser of two evils, with the Fed keen not to give any impression of tapering or tightening. However, according to Bloomberg News, US Treasury Secretary Janet Yellen and Fed Chair Jerome Powell discussed the hot housing market in July at a meeting of the Financial Stability Oversight Council. Should prices continue to race ahead, pressure will only build.

To ensure its Harmonised Index of Consumer Prices (HICP) better represents the inflation relevant for households, in July the European Central Bank (ECB) also announced it would begin to include owner-occupied housing costs in its inflation measure. While this was the result of a longer-term strategic review rather than a reaction to recent moves, and to some extent brings the ECB more in line with other central banks, the result is the same: house prices will finally have a bearing on monetary policy in the world’s second largest economy.

How much further house prices have to run is anybody’s guess. However, the signs of a global housing ‘bubble’ are clearly building. Given the systemic dangers this presents – and with the memories of the 2008 sub-prime crisis still seared into our memories – rising house prices may well be the issue that forces central banks hands when it comes to tightening policy in the years ahead.

Mark Ambrose of Staude Capital Limited in London is the Portfolio Manager and Corporate Affairs Advisor at the Global Value Fund (ASX:GVF). This article is the opinion of the writer and does not consider the circumstances of any individual.

Share
< Baby bust: Will infertility shape Australia’s future? What do you expect from your portfolio today? >